In the month of September we have the biggest holidays in ethiopia like Enkutatash(Ethiopian New Year), Meskel/Demera(The finding of the true cross) 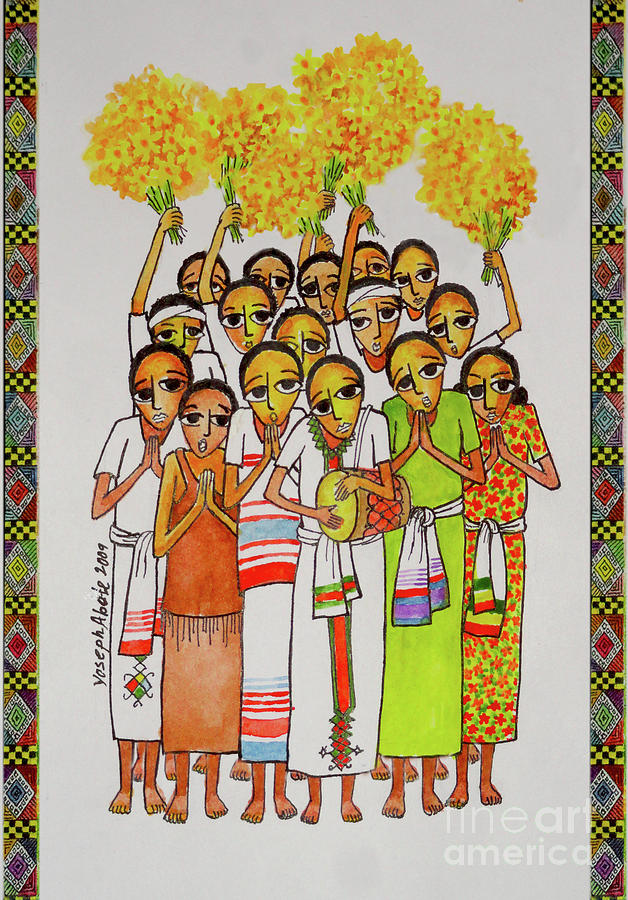 September 12th, marks the first day of the first month – known as Meskerem – of the new year for both Ethiopia and Eritrea. The name “Enkutatash” translates to “Gift of Jewels” and alludes to a centuries-old tale of Queen of Sheba’s visit to King Solomon. She brought a range of gifts for the king and, upon her return home, was welcomed with a supply of “enku” (jewels) for her treasury. Today, there are still many lasting traditions to observe Enkutatash. Most families gather to enjoy a traditional meal and celebrate by giving gifts to the children. In some places, celebrations may last for multiple days, including the eve of Enkutatash, on which it is common to attend a church service and to offer prayers ushering in the new year. Singing and dancing are also popular ways to celebrate, especially among young girls. Traditionally, bouquets of freshly picked flowers (symbolizing the coming of spring and period of revitalization) and painted pictures of saints were given by children in exchange for reciprocal gifts. Today, however, greeting cards are much more common.

Meskel/Demera(The finding of the true cross )

According to Ethiopian Orthodox Christian tradition, the national holiday marks the finding of the cross that Jesus was crucified on. Thousands celebrated the eve of the festival, known as Demera, by gathering in Meskel Square in the heart of the capital city, Addis Ababa. Demera, which falls on 26 September, is a colourful occasion, attracting scores of believers in dressed in robes. They are joined by hundreds of priests and deacons from churches around the city, who bring drums and ornate crosses used in religious ceremonies.Before sunset, a huge pyre in the centre of the square is lit. The bonfire signifies the efforts made by St Helena, the mother of the Emperor Constantine, to find the cross while in Jerusalem in the 4th Century.It was in Jerusalem, the story goes, that St Helena was advised to light a fire that would show her where to look. The smoke from that fire pointed to the place where the cross was buried.St Helena is then said to have given pieces of the cross to all the churches, and the Ethiopian Church still claims to have its own piece.